We are the industry of industries

Unigel is one of the largest chemical companies in Brazil, holding a leading position in the production of Styrenics, Acrylics and Nitrogen Fertilizers in Latin America. Founded in 1966, the company is strategically located in Brazil (in the States of Bahia, Sergipe and São Paulo) and in Mexico (in the States of Mexico, San Luís Potosí and Veracruz).

Unigel makes itself present in day-to-day life by supplying fundamental materials for the manufacturing of products in a wide range of segments, such as Home Appliances & Electronics, Automotive, Inks & Coatings, Civil Construction, Pulp & Paper, Packaging, Health & Beauty, Textile, Mining and Agriculture, among others.

With sustainability and innovation as core values, the company develops technology and products that aim for social, economic and environmental welfare. As a result, Unigel has been awarded Ecovadis’ Gold Medal since 2020 as recognition for its sustainable business practices and for the social responsibility programs implemented in the communities in which the company is present.

In 2020, Unigel launched the Ecogel line of products, which turns post-consumption recycled plastics and post-industrial residue into products again. With Ecogel, the company promotes a circular economy, stimulates the creation of a reverse logistics chain and nurtures the socioeconomic and environmental development of the communities involved in all stages of the product’s lifecycle.

We are organized into three business segments:

Our acrylics business mostly consists of the production and sale of acrylonitrile, methacrylates (MMA, EMA and GMAA), cell cast acrylic sheets, sodium cyanide and ammonium sulfate, which are used primarily in textile, automotive, construction, health care and electronics applications, or Acrylic Business. Our acrylics products are mainly sold to chemical manufacturers and transformers.

We produce our acrylics products at production complexes located in Bahia, Brazil, and in Mexico:

Bahia:
We operate production sites in Bahia state (Camaçari and Candeias), where we produce acrylonitrile, methacrylates (MMA, EMA and GMAA), sodium cyanide and other products, such as PMMA resin and acetonitrile. We also produce other intermediate products that are consumed in our production processes, such as ACH and HCN. Given the strategic location of our facilities and our integrated business model, our production sites in Bahia supply MMA to our Mexican cell cast acrylic sheets production.

Our styrenics business mostly consists of the production and sale of styrene, polystyrene and latex, which are used primarily in the production of consumer goods, electronics, construction materials and home appliances, or Styrenics Business. Our styrenics products are also mainly sold to chemical manufacturers and transformers.

We produce our styrenics products at production complexes located in Bahia and São Paulo, both in Brazil:

Bahia:
We operate one production site in Camaçari (BA), in which we produce styrene. Part of the styrene produced at our Camaçari site is used as a raw material in our integrated polystyrene and latex production facilities in our sites located in São Paulo, Brazil. At this site we also have a state-of-the-art ethylbenzene plant using liquid zeolite technology. The ethylbenzene is used as feedstock to our two styrene plants, in Camaçari (BA) and Cubatão (SP).

São Paulo:
We operate industrial facilities located in three different sites in São Paulo: Cubatão, São José dos Campos and Guarujá. We produce styrene in our industrial facility located at the Cubatão petrochemical complex, close to the port of Santos, one of Latin America’s main ports. In São José dos Campos, we operate a polystyrene plant located in the Monsanto industrial park. We also operate a polystyrene plant and a latex plant located in Dow Chemical’s petrochemical site in Guarujá, close to the port of Santos.

Our Agro business consists in the production of ammonia, urea, ammonium sulfate and DEF, which are primarily used in agriculture as fertilizers, in the industrial sector as processing material, and in the automotive industry as a means to reduce nitrogen oxide emissions. Our structure is a result of the consolidation of the ammonium sulfate production capacity that already existed within our Acrylics business and the operation of two nitrogen fertilizers production plants leased from Petrobras.

Bahia:
Since the first half of 2021, we have been operating a plant in Camaçari-BA (now Unigel Agro Bahia, formerly known as FAFEN-BA) which has the capacity for production of ammonia, urea and DEF (Diesel Exhaust Fluid). Part of the ammonia produced in this plant is meant to be used as input by our Acrylics plants in Camaçari and Candeias, which in turn also produces ammonium sulfate, a fertilizer.

Sergipe:
Also since the first half of 2021, we operate a facility in Laranjeiras-SE (now Unigel Agro Sergipe, formerly known as FAFEN-SE), which has the capacity for production of ammonia, urea and ammonium sulfate.

The maps below show the location and the annual nominal production capacity (in tons per year) of key products in our production sites as of December 31, 2020: 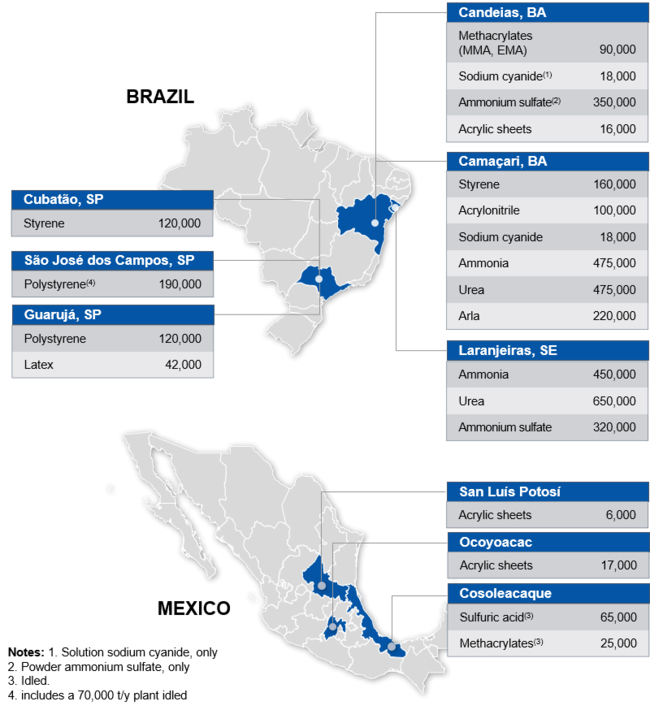